Bird’s nest is expensive and should be stored away carefully to avoid molding due to dampness. One can store bird’s nest in clean plastic boxes lined with desiccating materials and airtight cover in a dry place.

It is better to store it refrigerated while ensuring its dryness at temperatures around 5 °C for longer storage. For storing small quantities, seal it in a plastic bag and place it in the refrigerator to ensure its quality.

All in all, bird’s nest should be store in an airy, cool and dry place away from sunlight.
时间： 10:24 PM No comments:

燕窩燉法和吃法 HOW TO STEW AND CONSUME BIRD'S NEST

It is best to use chlorine-free water or distilled water (R.O. water) to stew bird’s nest, or one may use mineral water. The amount for individual consumption is 5g to 6g.

One important thing to note is the length of time in soaking and stewing bird’s nest, which are determined by the quality and type of bird’s nest used. House bird’s nest takes only 45 minutes to stew.

According to traditional theories, the human body is at its most relaxed stage from 11.00 p.m. to 1.00 a.m. and this is also when it is most easily absorbed by the meridian and the human body. It also helps to remove excessive heat from the body.
时间： 9:18 AM No comments:

從營養學的角度看燕窩 EXAMINING BIRD'S NEST FROM THE NUTRITIONAL POINT OF VIEW

It is believed that the proteins contained in bird’s nest is a form of non-complete protein which is different from the proteins found in milk or eggs.

Furthermore, there are certain trace substances in bird’s nest which are yet to be determined but which possess medical and therapeutic values. It is therefore wrong to evaluate bird’s nest from its sugar and protein contents.
时间： 9:15 AM No comments:

從生物化學的角度看燕窩 EXAMINING BIRD'S NEST FROM THE BIO-CHEMICAL POINT OF VIEW

According to an article entitled “A Study of Bird’s Nest” by Professor Jiang Run Xiang and Mr. Guan Pei Sheng from the Hong Kong Chinese University, Professor Jiang had announced a study report in 1987 proving that the protein in bird’s nest is rich in bio-active protein molecules.

These molecules are probably the revitalizing factors in bird’s nest. In his article, Jiang said, “From the scientific research of today, we know that bird’s nest contains an Epidermal Growth Factor. Bird’s nest is water soluble and can directly stimulate cell growth and improves the Mitogenic Stimulation Factor.

These Epidermal Growth Factors coincide with the nourishing effects described in Chinese medicine and it has been deduced that bird’s nest possessed the following three properties:
Another important property is the “beauty factor” which stimulates cellular fission and carries out repair on damaged skin, promoting the healing of post-surgical wounds. It affects the smoothness and ageing of human skin, activating cells in ageing skin, providing it with lustre and elasticity.
时间： 9:12 AM No comments:

Not all bird’s nests are edible, it is because most swallows build their nests with twigs, straw and earth which are not edible. The only type of edible nest is made by the golden swallow which lives in South East Asia.

It spits out saliva onto cliffs to make nests and these are only made edible after harvesting and removal of feathers. Among these, the white bird’s nest and yellow bird’s nest are common while blood bird’s nests are rare, and due to its peculiar colour, it has been regarded as a precious product.

Bird’s nests come in various shapes including whole pieces, strips, cakes, pieces, broken pieces and balls. In terms of quality, it is divided into various categories such as house bird’s nest, cave bird’s nest, feathered bird’s nest, grass bird’s nest and the earth bird’s nest which is commercially valueless.
时间： 9:08 AM No comments:

燕窩的功效 THE EFFECTS OF BIRD'S NEST

補肺養陰﹑止肺虛行性咳嗽﹑減少肺氣病變。包括肺陰虛之哮喘咳﹑痰中帶血﹑咳血﹑咯血﹑支氣管炎﹑出汗﹑低潮熱。
时间： 8:58 AM No comments:

燕窩的益處 THE BENEFITS OF BIRD'S NEST


Bird’s nest nourishes the lungs, dissolves phlegm and stops cough, providing a nourishing and clearing effect and is considered an excellent medicine for regulating and treating weakness. It has also been regarded as a beauty product.

Other than its rich collagen water-soluble proteins and mucosaccharides which moisturizes the skin, bird’s nest also contains an epidermal growth factor which stimulates growth of cells and promotes their reproduction and regeneration according to the “Choice” monthly magazine from Hong Kong.

Its active water-soluble protein also stimulates cell growth in the immune system, increasing metabolism, inhibiting gastric acids, promoting blood circulation, strengthening the heart and improving appetite which make it an excellent product for nourishing the body after recuperation from illnesses.

There are recent reports on the web that modern medical evidence has proven that bird’s nest is actually an anti-oxidant with detoxifying effects. There is also evidence proving that the consumption of bird’s nest is effective in the treatment of lung cancer!

Regardless of whether the miraculous effects above are true, Chinese medicine regards bird’s nest as possessing a sweet taste, mild in nature, neither cold nor heaty, nourishes the meridian of the lungs, stomach and kidneys while possessing nourishing effects for better circulation of oxygen in the body.

The therapeutic effects of bird’s nest has been recognized since ancient times and one would derive benefits without fear of dangers even when it is consumed in large quantities.
时间： 8:53 AM No comments:

認識燕窩 AN INTRODUCTION TO BIRD’S NEST 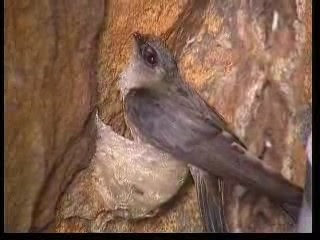 The practice of bird’s nest consumption by the Chinese can be traced to the Tang Dynasty where it was already one of the “royal tributes”. It was said that Queen Wu Ze Tian was one of the emperors in those days who loved bird’s nests. In the later part of the 17 th century, large quantities of bird’s nest were imported into China from Jakarta in Jawa each year.

Bird’s nests is a structure made from the saliva of swallows combined with other substances and what Westerners consider called “EDIBLE BIRD’S NEST” is actually bird’s nests which can be eaten.

The golden swallows which build such edible bird’s nests are different from the ordinary swallows we see. They are smaller in size with longer and sharper wings, shorter tails, thinner legs, strong flying capabilities and seldom walk or stand. They sleep or rest just like bats, by anchoring themselves onto structures. They utilize well-developed salivary glands to secrete saliva which solidifies when exposed to the air.

Golden swallows build their nests three times a year and when they are about to lay eggs, their bodies grow fat and their saliva production increases, resulting in their ability to build larger nests. In times of urgency, they would use other building materials such as their own feathers, grass and roots and mix them with their saliva to build their nests.

In fact, the reason swallows build their nests three times a year solely for the purpose of laying eggs for propagation purposes. They stay in each nest only once, waiting for their nestlings to grow up and leave the nest.

Swallows take about 45 days to build their nests, 7 -10 days to lay eggs and about 15 days to hatch them. Swallow nestling would be able to fly after 45 - 50 days. This process takes about 110 - 120 days and harvesting of bird’s nest is done after the young swallows have flown away. The lifespan of golden swallows is about 15 - 20 years.

The bird’s nest production in South East Asia is mainly concentrated in Indonesia, Malaysia, Thailand, Burma and Vietnam. Among these nations, Indonesia produces the most bird’s nest and statistical evidence showed that Indonesia produces approximately 80% - 85% of the total market supply. Quality is of course one of the important factors considered by those who love bird’s nest.

Whole golden bird’s nest is rich in nutrients and it brings about excellent effects for those who consume small quantities on a long term basis. They include those beauty-conscious, health-conscious, pregnant ladies, children and the aged. It has been recorded in the “Ben Cao Gang Mu” that bird’s nest produces energy upon absorption by the lungs, nourishes the kidneys and the spleen upon absorption by the stomach and it is not heaty. It has been highly regarded as the best nutritional product since ancient times.

Birds' nest has been used in traditional Chinese medicine for many centuries. According to the Chinese food concept .It is classified as a cold food or “ying”.

Bird's nest contains plenty of sustenance and possesses what the Chinese call “rejuvenating effects”. Current science has help determine the ancient belief that bird's nest contains a host of different proteins which is easily absorbed by our body (water-soluble glycol-protein that promotes cell separation within the immune organism), vitamins, and beside various other minerals present are calcium and iron.

It is possible that when taken with other foods through a cooking process, such as ginseng (as a hot food or “yang”), may have high nutritive and therapeutic value to human body.

Birds' nest is believed that it can strengthen the lungs and use in the medicinal and strengthening of body in diseases related to weak blood, body overheat, and other illness, or surgery. Bird's nest also contains elements which can stimulate cell growth and especially beneficial to elderly recovering from various body ailments. It is also making the skin delicate and growing radiantly.